I'm here to tell you about language learning and re-reading your favorite novels in translation. It may sound intimidating at first, but unlike reading a new novel, there are plenty of benefits to having a book that you've read before!

You don't have to worry about being confused or distracted by the story's meaning.

Say you're re-reading a fantasy novel. Rather than trying to figure out new vocabulary, new structures, and the plot on top of it all, you can focus on how the author uses words and sentences to set scenes and describe characters.

Instead, you have your work cut out for you. You can focus on the ways that specific phrases are used throughout different parts of the book—for example, "Bellatrix agitó la varita . . . " (Rowling, 2012, p.152). In this sentence, you might be unfamiliar with agitar as a way of saying to wave, but using context clues it won't come as a surprise what Bellatrix might be doing—not the first time and certainly not the last—right?

Context to fill in the vocabulary gaps.

In the last example, maybe you went to the dictionary (I recommend WordReference above any other dictionary—save maybe a visual dictionary) to figure out just what it is that Harry was doing in that example. Still, you won't need to resort to a dictionary every time you come across a new word. Context is key to understanding, and you're already familiar with the scene, the motivations, and the characters. The result? The catchy and memorable phrases of your favorite characters will likely make sense to you, even if you're unfamiliar with the vocabulary.
¡Cubrid las lindes, protegednos, cumplid con vuestro deber para con el colegio!
(Rowling, 2012, p. 196).
It's very likely you've never had to (and may never have to) use the word lindes, but you'll be well acquainted with the meaning of Profesora McGonagall's words, being the avid fan you are.

How do I choose the right book for me?

It's important to know yourself and set expectations early. You won't be flying through your favorite book like you usually do, but you'll be learning. Be patient with yourself and expect to do a little legwork before you get started (see: Instructor Tips below).
If you're anything like me, you have many favorite books. Even so, some books are more difficult than others. If you're new to language learning, revisiting a book (or series) that is written for a newer reader might be the way to go—not because you aren't capable, but because you're still getting a feel for the language. 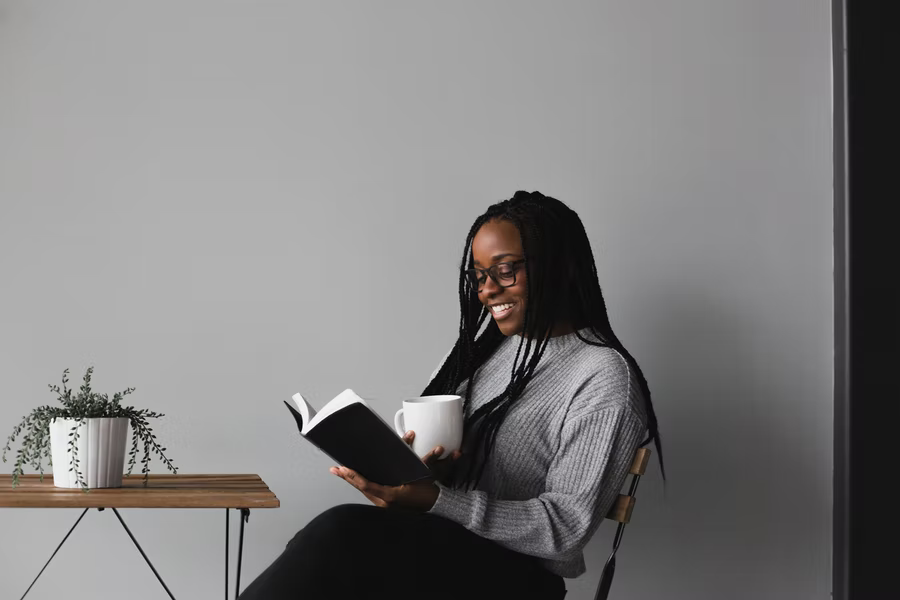 Going from Harry Potter y la piedra filosofal to Juego de tronos might be a bigger leap than you were expecting and may end up being more demoralizing than starting off small. Similarly, I wouldn't recommend just anyone try to take a bite out of El ingenioso caballero Don Quijote de la Mancha unless you're armed with a surplus of footnotes, time, and patience! Medieval Spanish novels are no joke!
Reading a book in one sitting might be your favorite way to spend una tarde lluviosa—with a big cup of tea y un suéter cálido. Still, in the spirit of being patient and not becoming overwhelmed, set reasonable goals for yourself. For one person, reading a chapter a night might be something reasonable rather than all afternoon. For another, maybe it's a page. Once you reach your goal, celebrate!
If you start off with a book that is a cinch to read and read quickly, count that in your victory pile! Move on to the next one. What's great about series like Harry Potter or Percy Jackson is that they increase in difficulty and length with the ages of the characters! They're a great introduction to reading in your new language!
According to Pichette (2005), language learners who benefit most from reading are students who have an intermediate level and above in the language. If you are still working on the fundamentals, maybe a book is more than you want to take on.

Don't take this to mean that you should throw reading to the wind, however! There are still plenty of benefits to reading at every stage of learning, but too much vocabulary can overwhelm you and is more likely to prevent you from making progress in language learning (Pichette, 2005; Smith, 1994; Clarke, 1980). If you are still learning the fundamentals, I would recommend more interactive media, such as movies or series that can help you connect the words with imagery and actions on screen.

So, if you’re looking for something to do while you wait out your next flight delay or have a few minutes before work, why not pick up an old favorite and read it in a new language?

Preparing to read
To prepare to read, try sitting down with your favorite book and coming up with 10-15 words that you want to know or expect to see before you get started reading the book in the language you're learning. Doing this before each chapter may help you cut out a lot of the guesswork when you come across something unfamiliar.
Copying down vocabulary
Everyone is different, but one thing that will put you off your reading is stopping for every word you don't immediately recognize. Devise a strategy that works for you and lets you record the new vocabulary in a way that lets you review them (you can use any number of vocabulary solutions, so long as you can study them and review them). Maybe this is after you've reached the end of a chapter or a page. You might find that you can deduce the meaning without the help of a dictionary if you persist.
Retaining vocabulary
New vocabulary is likely to return. Beyond the likelihood of their plot requiring a new vocabulary word to return, authors are drawn to words (and why wouldn't they be with such beautiful words like plañidero) and will—most probably—use those words again in another moment. Researchers Nation and Wang (1999) suggest that you need to see a word at least 10 times before you begin to incorporate that word into your new language. A good strategy for reviewing vocabulary is the spaced repetition models used by many apps.
Keep your head up, your vocabulary apps full y superarás las lindes de tu conocimiento en español—or any other language for that matter.

Wyatt holds an MA in Spanish Language and Literatures from Texas State University where he wrote his thesis on colloquialisms (expressions, phrases, and swearing!) and second language instruction. Having travelled extensively in several different Spanish-speaking countries (including Mexico, Costa Rica, Nicaragua, and Bolivia), his heart remains in Spain with many of his friends. Whether chatting en la terraza o tomando el sol en la playa con un libro, Wyatt is happy living the quiet life while travelling.